Let’s take a closer look at how gameplay webs and dramatic elevation work in practice—and how these things relate to that classic icon of RPG adventure architecture: the dungeon. 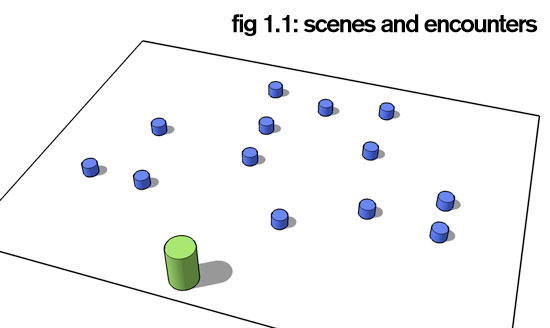 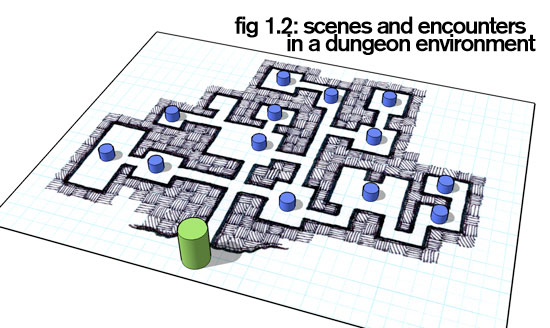 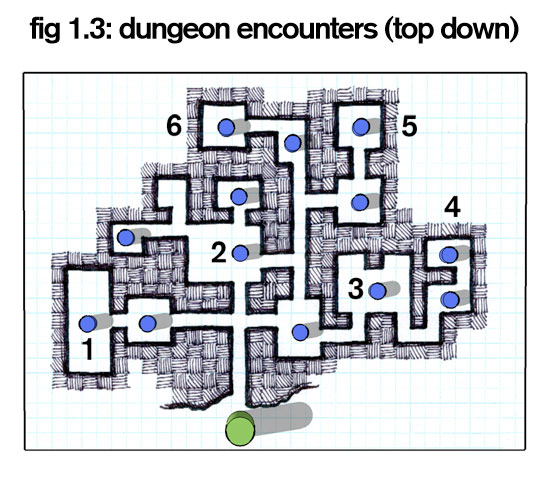 Scenes or encounters arranged to one side of an instigating event (fig 1.1) represent momentum, motivation, or even just a thematic direction to the action that’s about to unfold. This is just a visual trick; it implies that there are other avenues that lead away from what’s relevant to the story even if, technically, those avenues could be modeled by the game itself—but those other avenues go in the wrong direction. “In this scenario,” the web says, “we’re going this way.”

What is it that, in practice, can keep a scenario’s potential encounters fixed to one side of an instigating event? What can keep the players within mutually accepted confines that restrict a story without feeling too much like they restrict play?

You have a few options. In a future article, we’ll talk about shaping encounter options through theme or mood alone. In this article, we’ll look at something a little more rigid and with a more tangible manifestation in the game world: the traditional dungeon. This’ll also show just how a gameplay web can be managed, and what it can represent. Most of all, it’ll represent how a gameplay web is really something we’ve been using all along.

1. Dungeons Simplify
A dungeon environment—whether it’s a D&D adventure, an MMO instance, or an FPS level—makes it easy to present and recognize available choices. Right or left? This room or that room? Fast or slow? Bust down the door or creep past it? All gameplay webs are essentially maps of choices, and making choices with consequences is the heart of all gameplay.

A well-designed dungeon presents meaningful choices at every stage of its design, from the map (which way do we go?) to the encounters that populate it (do we risk fighting this monster when the noise might wake the dragon in the next room?), even to the art design of the environment (do these engravings in the walls contain some clue about what lies ahead?). It’s a manifestation of questions and consequences, a kind of idea palace made out of choices like doors and intersections and consequences like traps and monsters.

2. Dungeons Add Context
The implicit visualization that comes with a dungeon environment brings the imaginations of the players together. The space between encounters isn’t an abstract line but a stone corridor, alike (if not exact) in everyone’s imagination. How long will it take to get from one end of that corridor to the other—from one dot to the next—is clear, because each square equals five feet and the game tells us what that means to our ability to plan and choose.

In truth, the dungeon is bullshit. It doesn’t exist. But we agree that those lines on the page have authority in play, that they trump our ability to manipulate the gameplay web once play has begun. They define our choices, and show us what we implicitly agree to believe when we play together.

This makes it possible for a simple web to be structured and paced. That, in turn, makes it possible for the GM to create a degree of narrative structure out of the web—the encounters likely to be climactic are arranged such that they’re more likely to take place later. Encounters requiring the players to expend some of their resources are set up between the entrance and the coveted idol, so that when they reach the climactic moment of the game, the dramatic tension should be high.

Context facilitates control. It gives the GM control over the environment both during the design stage and during actual play. It gives the players greater control over their characters, because they can all trust in the obvious rules of the structure and its imaginary facts—walls, doors, or ogres.

3. Dungeons Flavor
A gameplay web by itself is an academic thing. An exercise. It’s not playful. With a dungeon environment wrapped around it, it can become exciting. The cold, rational architecture of the game can fade away, like the rigging behind the set on stage, leaving just the imaginary world. This is essential to the escapism in an RPG and even a board game—the choices on the map can be as abstract as Chess’s black-and-white squares or they can become Monopoly‘s Atlantic City properties, turning resource management choices into banking and real estate. So it’s about adding fun.

This is close to being the same thing as the second point, above, but it isn’t quite. Flavor is what keeps one dungeon from being like the last one. The very same map, redressed in a new art style and repopulated with new encounters, is a different dungeon—a lot of the same choices, a lot of the same context, but a new place, even if it’s familiar. The Aztec temple becomes the secret avionics lab becomes the cellar beneath the haunted house.

Good choices and a smart context make play rewarding and compelling, they engage the tactical part of the brain, but it’s the flavor of the place that makes you look forward to going there, makes you brag about conquering it. Your RPG character doesn’t brag about besting nested encounters or surviving three triggered reactionary events at once; she boasts that he survived the Tomb of Amun-Ra and found the golden idol. She reports back to the king that she has ended the hobgoblin threat and bested the dragon of Thunder Mountain.

The blue dots have become worth bragging about. The illusion has worked. Though the player’s freedoms have been restricted to a manageable few choices, who gives a damn? The options were real and the consequences were dramatic. The kingdom is safe.

Next time we’ll look at how a dungeon environment, and the characters’ path through it, reveals dramatic elevation, and how players add their own scenes to the dungeon through roleplaying and by bringing up their own choice-points.