Dreamblade’s online demo is much better than the live demo I played back at Gen Con SoCal (and wrote about here). It does a lot of things right, from letting the newbie player make a few mistakes without affecting the flow of the game to offering bits of advice. It does some things badly, too, like not explaining certain oddball exception rules very well.

But it also does something I didn’t expect, and that I don’t think is quite by design: It tells a little story. 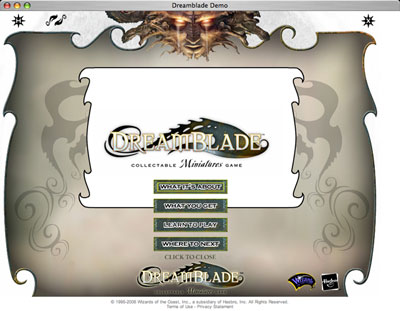 Click to visit the Dreamblade site and try the demo yourself.Early on, after the demo has set up the pieces and laid out the barest of victory conditions (control these particular squares to win), it drops the ball. It sets up a gameplay choice — put one of a host of miniatures into play — with only one right choice. It uses die rolls that I’m pretty sure aren’t random (forgiveable in a demo). It presents me with the appearance of a choice (banish an enemy figure into any square) and then yanks away that choice (no, not that square), which is worse than not allowing the choice in the first place.

Then it does something great: It cuts straight to the third act of play. Right when I’m about to give up on the demo because it all feels restricting and dull, it cuts into medias res, with a bunch of miniatures on the board battling for victory in the final round of play. The resolution. Suddenly the game has stakes and options… and a vague feeling of a narrative.

This is essentially a storytelling trick that’s been utilized here, after all — one which I’ve tried to use in live demos and mostly failed with. (It’s tricky to jump ahead, rearranging pieces on the board, without confusing somebody with unnecessary information; Dreamblade has the advantage of simplicity there, at least.) I make some moves, I get lucky on some dice, and I win the game. The story has a happy ending.

But it’s not enough. I want to know, at this point, if I’ve just won a scripted victory. Were those lucky dice rolls rigged to create this empowering climactic scene? And, at the same time, could I have made changes to my play that would’ve scored me an even bigger victory? I click the button that let’s me play the scene — er, I mean the round — again.

This time, defeat. The dice turned against me. I risked too much on a single die roll and paid the price. Suddenly I start to develop some appreciation for this game. (It stops before I’m appreciative enough to buy into it, but still.) 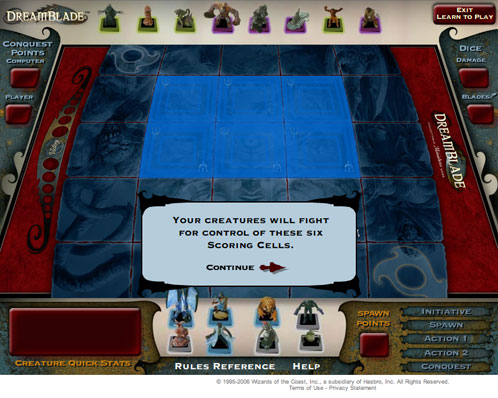 The Dreamblade online demo teaches the rules, then jumps ahead to the good stuff.The demo has concocted a single, railroaded scenario. It’s presented a short quasi-narrative experience (“this is the story of how that guy who started the demo ended up faring in the end”) with multiple possible endings, mimicking real play. And all it took to turn base gameplay into something that feels a little bit narrative was a quick cut to Hecuba.

That’s what your tabletop demo should be: brief, climactic, and compelling. A single circumstance, able to be played experimentally, again and again, that demonstrates how one turn is fun but why having the game, and being the kind of person who plays it again and again, is even more fun.