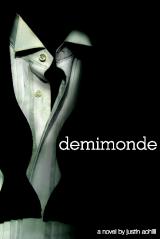 The holiday-season promotions continue. Justin Achilli, long-time developer of Vampire: The Masquerade and creator of Vampire: The Requiem, has a reputation. At game conventions, he’s a maniac, a debauchee, and a DJ. Around the office, he’s a pranking elitist in the very best sense. Online, he was known for forum fisticuffs and epic sass. Behind a pen, he’s a writer with high standards. When he left White Wolf (for what turned out to be a sabbatical), he did what most RPG developers want to do: he wrote a novel.

It’s called Demimonde, and it’s a pretty fascinating artifact of a world-builder and game-designer journeying into the more-different-than-we-sometimes-think land of straight-up old-school storytelling. A demimonde, of course, is a group of people on the verges of respectable (or “respectable”) society. You play (or played) D&D or Vampire, right? You’ve been a part of the gamer demimonde. I think Achilli’s writing as much about fringe geeks as he is about hedonistic deviants, here, though it may all be the same to him. No spoilers here, ’cause I haven’t finished the book yet, but it’s got all the sex, drugs, religious conflict, and attitude that you’d expect from the guy who breathed Vampire: The Masquerade‘s last breaths. Much more interesting to me, is to see Achilli put his storytelling advice into action — and to see him go forth and publish the damn thing himself. (It’s about time, Winghead.)

Whether you like walking corpses, anonymous sex, and theological schisms or not, this thing’s a great conversation piece for White Wolf fans from way back and right now. Get the thing as a PDF at DriveThruFantasy or get it in print for something like twelve dollars.

I’m eager to have more people read it so I can discuss it. Read it already? Do comment.