At the Feet of Giants

This weekend I ran the first session of an ongoing campaign-in-miniature set in Middle-earth, using the game rules from Francesco Nepitello’s The One Ring (TOR).

In the parlance of play, I’m hacking and drifting this game in bits and bobs to get a certain kind of play out of it. Some of the adjustments I’ve made come from ideas cooked up back when I was a playtester on the game. Other tweaks come from Nepitello’s own ongoing development of the game, including rules incorporated in later official supplements like Tales From Wilderland (written by the under-sung hero, Gareth Ryder-Hanrahan). For example, we used the revised journey rules Nepitello’s been exploring on his blog (and talking about online) rather than those published in the official game rules. 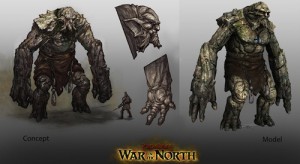 A Stone Giant (War in the North)

In addition to tinkering with The One Ring, I’m tinkering a bit with Middle-earth’s lore and feel. I like playing in Middle-earth every now and again because of its combination of charm and menace. Plus, I like playing at Tolkien-style fantasy not just by recombining Tolkien lore into new adventures but by drawing on history and myth to add or expand the lore of Middle-earth for my own games—hacking and drifting Middle-earth into my own playable fanfic. I’m not just roleplaying as Hobbits and goblins, in other words; I’m also roleplaying as a mythopoeic romantic a la Professor Tolkien. It’s good fun.

One of the things I messed with in this weekend’s adventure was the notion of Giants in Middle-earth. Tolkien refers to giants in The Hobbit but isn’t real clear what they’re actually like. That’s fine with me; it gives adaptations room to explore, interpret, and play. 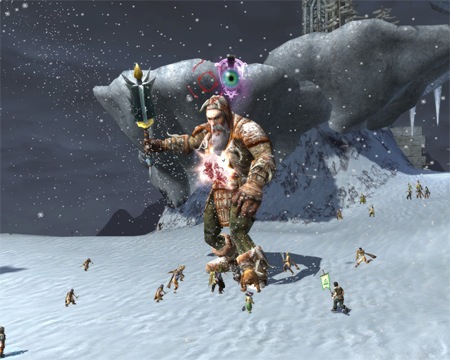 A Giant of the Misty Mountains (LOTRO)

Various adaptations of the material have portrayed Giants in different ways. Lord of the Rings Online (LOTRO) sees them in a sort of classic mold as really, really big people (actual size varies by Giant) with their own culture and agendas going on. I like the mix of fairy-tale simplicity and accessibility, there, and tried to get that across in some of the lore guides I wrote for LOTRO (like this one).

War in the North, on the other hand, features a Stone Giant who is as stony as he is gigantic: Bargrisar. He’s visually interesting, a little mysterious, and puzzling in his place in Middle-earth (remembering that War in the North leans more towards the movies than LOTRO does) while sort of evoking the rocks-and-moss equivalent of an Ent. I dug him, too.

For the giants in my TOR adventure, though, I leaned more toward those of LOTRO. I wanted them to bear a bit more resemblance to ordinary men and women (because it plays into later adventures) and I wanted the associations with giants from Norse myth, too. This doesn’t mean that “stone giants” or something like them won’t appear later on—my home-game version of Middle-earth sports a fair number of non-canonical monsters, I think.

Of Honey-wine and Wizards

I didn’t prepare a whole lot of notes for the adventure that I feel comfortable sharing with you (my notes are pretty rough), but I thought I’d share some things anyway. Here’s the read-aloud text I wrote (and read! for reals!) to kick off the Quest of the Lofty House in this first adventure (“Chapter 1: For A Drink of Mead”):

“The mead of the Mountain Hall has been stolen and spilled. This is an ill-tiding of perils abroad and at home. For while it has long been a draught of old tradition and autumnal peace, this year it shall be drank in woe and worry, hate and hope, by killers and kith alike.

“Once, long ago, that fabled honey-wine toasted to treasure and ruins, leading to spite and blood. Once, again, it shall flow for such dread days. But if poured in peace, the mead may celebrate new bonds and happy resolve, bringing fellowship and forgiveness in the face of looming Shadow.

“And a Shadow there is, up amid the peaks, dwelling ‘neath the mountain and seeking to poison the will of the Woodmen with the bitter bite of pride. Look to the memory of triumph, ruined upon the mountainside, and ye’ll find the bones of old friendship. May a drink of mead on a worthy day set hope moving against the winding Shadow, though, and new friendships gleam like gold amid the wreckage of old. Find there the fruit of the Lofty House and carry one day a token of it to the Brown Wizard. These are your quests, traveller, and not the task of the Woodmen of the Mountain Hall.”

That intro text stood in for a message from the Brown Wizard, Radagast, which was brought to each PC separately, dispatching them each to the Woodmen stronghold of Mountain Hall on their quest. Some of them got this message from a voice on the wind, some from messenger birds, one from the wizard himself. They related their account of the missive during the first tests of the campaign—ice-breaking tests that portrayed either how they replied to the wizard’s messengers or how they presented their tale to the Woodmen of Mountain Hall (using TOR’s roleplaying encounter rules with a Tolerance set equal to the number of PCs in the company).

Players used skills like Awe, Inspire, Courtesy, and Song to convince the Woodmen that their intent was true, their mission good, and it worked. The Woodmen, convinced the company was there to help, responded with a toast. They raised their tankards and shouted, “Skål!”

Up in the mountains, within the old Dwarf-hold of Zanurzandûm, beyond the looting goblins and the woeful giant, Hafnír the Small, our heroes also faced a Dwarf-door, complete with riddle, protecting ancient treasures beyond. Here’s the riddle on the Dwarf-door sealing the vault of the Dwarf-hold—a riddle I borrowed from Heidrek’s Saga:

Bring us the mind-whacker,
the word-thwarter,
the word-pourer,
and let us rise and fall
again as friends.

Can you guess the answer to this riddle? Highlight the following text to read the answer: The answer to the riddle is a simple toast in the old tongue of the Northmen (though I substituted Icelandic, ’cause it’s a language I know how to toast in): Skål! (End of spoiler.)

I tied some of this into proper Middle-earth lore about the Fram, slayer of the dragon called Scatha, and the hoard Fram kept from the Dwarves, which kicked off the war that took Fram’s life. (When Dwarves asked for their share of the dragon’s hoard, Fram responded by sending them a necklace of dragon teeth and this message: “Jewels such as these you will not match in your treasuries, for they are hard to come by.”)

The business about giants questing at the behest of another “voice on the wind” I made up for this campaign. It ties into a torc discovered in the Dwarf-hold treasure hoard—a Dwarf-made torc wrought from lustrous gold and depicting a two-headed dragon. There’s more to that tale, for future adventures.

Of Combat and Play

In addition to altering the lore, I’m playing with the game mechanics of TOR a bit. Specifically, I like making adjustments to the combat system to reflect specific bouts and battles—something I was happy to see Tales From Wilderland does, too. (The more we play, the more I’ll tinker and make adjustments to reflect particular scenes and situations, I expect.) Our first battles were pretty straightforward, but I think there are some fun hooks to hang gameplay options on with this game. How can the “knockback” option be made more or less attractive in specific environments (like on narrow bridges over rushing waters)? When can defending an ally be more important than defeating foes (such as guarding a companion who bears a delicate treasure)?

In truth, we didn’t get into alternate combat options during our first session. (The only characters who ended up fighting a giant were the giant, Hafnír, and a Hobbit who took on points of Shadow using an instrument of foul sorcery to save Hafnír.) Future battles will be custom-designed to maximize and dramatize the player’s options, though, so I can get a good slew of diverse battle situations out of the system. I’ll share those as they occur.

As we keep playing, over the weekends leading up to the release of the first Hobbit film, I’ll check in with other notes and reports of actual play. In the meantime, if you’ve got experiences gaming in Middle-earth, let’s hear them in the comments!