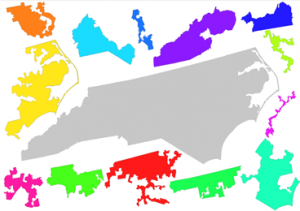 What the hell is that red thing supposed to be?

The argument’s made from time to time that to teach something really effectively, you have to make it interesting. Game designers sometimes make the follow-up point that games are pretty interesting.

Everybody knows that gerrymandering is a nonsense process of carving up voting districts to better serve incumbents in future elections by reshaping the areas they serve to include more of those likely to vote for them and to exclude those less likely. It’s nonsense; everyone knows this.

But have a look at Slate’s Gerrymandering Jigsaw Puzzle. As you drag the districts around the state maps trying to figure out how they can possibly fit together, you truly get sense of the magnitude of nonsense that generated these divisions. The first one, Iowa, is such a cake walk they use it as a tutorial. Do a couple more to get a true sense of the point being made, here.

Games can teach in a way that nothing else can.