A screenshot of Weathertop in Lord of the Rings Online, taken from actual play.Out of curiosity, ever since the first day I played LOTRO, back in August, I’ve been informally polling players in the game with a few questions. I’ve asked on open channels, I’ve asked the members of kinships and Fellowships, I’ve asked strangers and in-game friends. Most of the questions I ask are about people’s history with paper RPGs, but the question that gets ignored the least: “Why are you here? Why did you choose LOTRO?”

A lot of the people I talked to had strong, positive opinions about their choice of MMORPG. I was expecting most answers to somehow involve the global MMORPG superpower, World of Warcraft. Some answers did. But three of the answers I got the most often surprised me.

This wasn’t scientific. I’m not Pew. I was just asking around. A lot. These three answers stood out based largely on how often they came up, in one form or another, but also because of the lessons I gleaned from them.

“I liked the devs”

Outside of a few noteworthy development houses, like Blizzard1, I don’t see much developer-loyalty in video-game players. Even those who have favorites play games from lots of other developers. And a video-game company’s good rep seldom survives more than one mediocre title.

More to the point, I wasn’t surprised to hear it about Turbine. Prior to DDO, I hadn’t heard of them as a company even though I’d heard of Asheron’s Call. (Never played it.) DDO was, despite some charms, not a winner for me.

But inside LOTRO, Turbine seemed to have quite a few fans, so they’re doing something right. How many of these fans liked the developers from a previous game, and how many liked them just from the online presence leading up to LOTRO’s launch (as I did)? I don’t know, but it seems developer loyalty is enough to get $15 a month out of people who could be playing practically any MMORPG out there.

I’m curious to know how many Turbine fans would be playing LOTRO because it’s a Turbine product if it wasn’t set in Middle-earth or some typical fantasy setting. Is DDO popular and I just don’t know it? 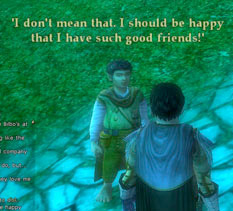 “I should be happy that I have such good friends,” Frodo tells you in LOTRO.At first, I couldn’t quite sort out the meaning here. I took these responses to mean that a game has friendlier players when the game itself is still young. After a few weeks, I got it through my head.

What people were trying to tell me was that newer games — meaning games newer than World of Warcraft — tend to have friendlier players. The popular notion seems to be that griefers and scumbags migrate and stick to WoW, like flies to flypaper. (To be fair, lots of nice people stick with WoW, too. They are the clover honey that attracts the barfing flies.)

What I want to know is why WoW has such a volume of negative players or why LOTRO has such a high percentage of friendly players? Is it illusory? Are all the nice WoW players in happy Guilds like hippy communes, never coming out to mingle with the drab masses? Is it a side-effect of the sheer volume of WoW players? Is it just another case of an obnoxiously verbal fraction? (If that’s the case, what makes the verbal fraction on LOTRO so neighborly?) Are the WoW servers I played on flukes? Are all of us playing LOTRO just delicate, lily-livered dandies?2 Is it WoW’s more cartoonish visual style or aggressively aggrandizing PvP components?

Truth is, I don’t know. What I do know is that LOTRO has a reputation within its own community for being a friendlier game. Less pressure. Less bullshit. Fewer people around trying to churn real cash out of the game.

Will it last? LOTRO is seven-months and three-expansions old, and the reputation persists. We get spam from gold-farmers, sure, but the behavior of genuine-play persons seems much more civil. The game feels more “mature” (fair to be read as “dry” or “stuffy,” as this is Tolkien after all, but also to be read as “relaxed,” “nuanced,” and “without so many foul-mouthed pre-teen scumbags”), but is that the chicken or the egg? I’ve been surprised more than a few times to discover this or that player is fifty-years old or fifteen. It’s about behavior more than age. 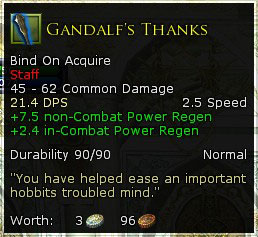 This is the answer I was expecting, and I imagine Turbine was expecting it, too. I got this one a lot. Still, I misjudged things here, and found the answers didn’t quite match my expectations. A lot of the people I talked to hadn’t migrated from WoW because they liked Lord of the Rings — they were giving MMOs a shot for the first time, with LOTRO, because they loved Middle-earth.

I thought the Lord of the Rings license (like the Conan and Warhammer licenses) was hoped to lure players out of WoW and deeper into the MMORPG marketplace, like paper-RPG licenses hope to snag a percentage of D&D players. I’m surprised at how often I meet all-new MMORPG players who’ve been drawn in by the game world.

This is interesting for me because, while I can get giddy about “meeting” Gandalf3, same as anybody, I’m not a huge Tolkien fan. I didn’t read Return of the King until the movie was imminent. I really don’t like that last movie. Loyalty to authentic Tolkien lore isn’t a serious component of the game to me — I respect that the developers have gone as far as they have to honor the material, but also that they’ve found a way to scratch (however lightly) the itch for a wizardly character class. (Jeff may have more to say about that from his time on another Lord of the Rings RPG.)

I’m here to see the stuff from The Hobbit, but also to see how the creators have managed to expand the field without, you know, wandering too far afield. So my interest is extended by a curiosity borne of the source material, but I’m not playing the game just for Middle-earth. (We’ll talk more some other time about why I continue to play.) 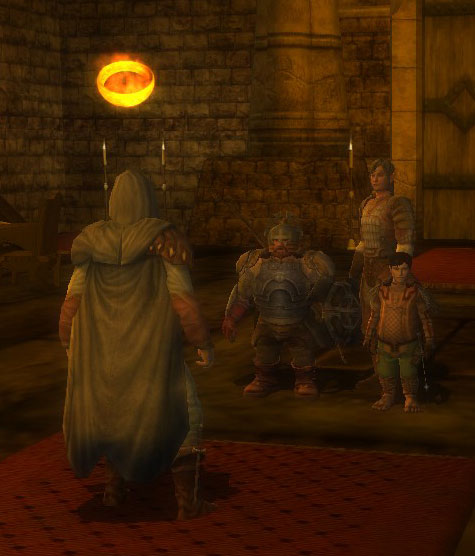 I don’t buy into the argument that MMORPGs will destroy paper RPGs. The old-school games may shrink, but they can also gain new visibility from people who start playing MMOs and then discover they’d like to design their own adventures. They can coexist. I play both, and expect to continue doing so. (I play a lot more RPGs than MMORPGs, though.)What surprises me is that the hurdle between laypeople and MMORPGs can be overcome by a love of the setting. In my experience, paper-RPG producers just accept that while books may be sold to new customers based on a beloved fantasy world, new players are seldom made through such sales. The learning curve on a game like LOTRO (or WoW) seems like it’d be pretty steep when you could, instead, just read the books or watch the movies again. (Of course, I’m still pleasantly surprised to learn that six million people, or whatever it is that’s supposedly playing WoW these days, continue to find any RPG experience worth $15/month.)

Someone do the market research for me, please, and let me know how many folks playing LOTRO are there just to meet Legolas. How many play despite the fiddly, gamey details? How many come for the Hobbits and stay for the PvP or the XP grind?

Here, though, we see one of the baseline, gene-level factors in the appeal of MMORPGs over paper RPGs: The ability to live in a world you already love, even if just for a few minutes. Visiting Middle-earth through a collaborative story or adventure experience just isn’t as easy as running around the Shire in an MMO. Sometimes, you want to create a rich and compelling adventure, but sometimes you just want to go and see what they ended up making Aragorn look like. Sometimes, you just want to go to a fantasy land and not do anything. A lot of RPGs don’t do that very well because most RPG play-groups don’t do that very well. It’s best done alone, isn’t it?

As I am lately a frequent LOTRO player, I’ll be regularly writing about it. Have questions? Play the game yourself? Let’s here from you.

—
1. Blizzard is the only company I know that can push release dates back into infinity and not lose sales or fans.
2. That’s me.
3. I was more excited to meet Radagast, actually, but this topic will be covered more later.