Unlike a lot of designers I know, I’ve been looking forward to the 4th Edition of Dungeons & Dragons. Unlike a lot of designers I know, I was finished with D&D v3.5 years ago. Plenty of people around my old workplace played the game weekly, still, and I tried to come back to it, but after living with the game for years back when I was at Atlas Games and doing freelance d20 System development for Fantasy Flight Games, one day it was like a switch was flipped. The hopper was full. I’d had my fill of D&D’s 3rd Edition.

For me, games are most fun when they’re new. Successful RPGs are prone to bloating, especially D&D, after years of new classes and powers and monsters building up. Worse, D&D 3E grew more and more complex in response to years of player feedback and developer turnover. By the end, for me, the game had so many little rulings and exceptions that DMing had become a chore. Making monsters and encounters was now like doing homework. It wasn’t what I wanted.

D&D 4E is a different creature. What I’ve seen so far (mostly from Keep on the Shadowfell) has me excited. And not just because the new rules are suspiciously close to my house rules from back in the day. 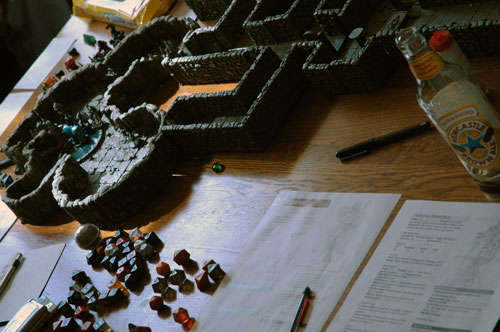 This is what playing D&D feels like, right? 4th Edition looks and feels like D&D around the table, and that’s not nothing.

Back in the days just before the bottom fell out of the clogged third-party d20 System market, when people still thought that compelling adventure settings might sell, I had a couple of them in the pipe with this company or that. Both of the ones I was serious about producing involved some serious rules changes and stylistic alterations to the D&D mode of play, if only because I like world-building and I like to tinker. Elements of both of these games have made their way, coincidentally, into D&D 4E.

I know that I talked about these system changes I had in mind with Mike Mearls, one of the great d20 System designers and one of the visions behind D&D 4E, and found that we were like-minded about some things that would make D&D more exciting. Eventually, Mearls moved on to be one of the defining forces of D&D and I moved on to take over Vampire (for better or worse). Mearls got to implement a lot of the changes we talked about back then. None of these, you understand, are actually mine—Mearls and I just shared certain philosophies. For example, we both felt that D&D combat should involve more movement around exciting locales. D&D 4E has that in a big way.

This movement-friendly, dynamic-battleground philosophy was a major part of my quasi-1930’s project Deco Dragons, which almost came to be. It was a complete new fantasy world, with elves and dwarves and halflings, like a D&D setting advanced to the early 20th century. (One of the things that killed my setting, as you can imagine, was Keith Baker’s Eberron, which ended up having almost no resemblance to my project anyway.)

In Deco Dragons, rogues were defined not just by their skills but by their ability to move all over the map during combat—a quality which D&D 4E rogues have, too.

Here are a few other examples of house rules of mine that are now standard practice in D&D: 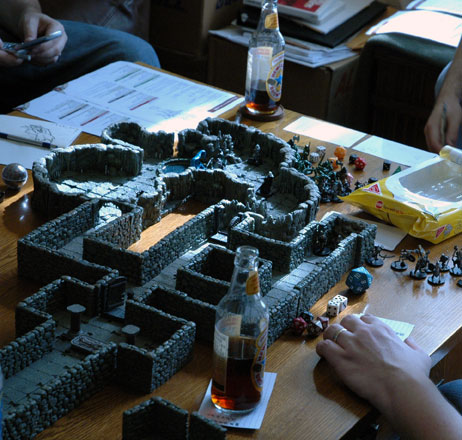 Zombie Weakness: In the new edition, rather than being immune to critical hits, Zombies go down immediately on a critical hit. As a DM, the obvious explanation is the classic zombie-dropping head shot. This is a rule I’d put into play in the almost-published Black Powder setting.

Encounter-Specific Powers for Monsters: In both of my nearly-realized campaign settings, monsters were granted abilities that enabled them to interact with the environment, perform unusual attacks, or otherwise surprise the players based on how they were deployed in the encounter. Plenty of these were based on things like the halfway-point on hit points (which D&D 4E uses, and calls “bloodied,” which I love), and others were based on the monster’s defeat. One example from Deco Dragons was a “monster” that, when defeated, sprayed machine-gun fire as he went down, shooting up machinery in the oil rig where he was encountered, and starting a happenstance death-trap of fire and flooding for the PCs to juggle. I’m a big believer that fights should happen on sinking ships and exploding oil rigs, rather than in bare rooms—the environment is the game world’s character, and should always be felt by the players. That’s immersion.

Traps and Hazards: So it’s no surprise that I dig the hell out of the way D&D uses environmental hazards like crumbling ledges and mysterious tentacles from the deep to spice up encounters. Now, instead of toggled damage-dealers, traps are interactive contraptions, part puzzle and part foe. They completely redefine the combat area, they move around, they move characters around, and they’re designed to interact with multiple classes. This resembles a lot of the work I did on traps for Deco Dragons and the environments in Backdrops

Skill Challenges: The way people are reacting to these on EN World and other forums is astounding to me. Are these extended actions really revolutionary for most players? I’m thrilled to see them systematized and put into action in clever ways in 4th Edition, but I’m surprised to see the fan reaction. What were people doing with skills before? Extended actions like these are natural suspense builders, and you can bet that I’m going to get a lot of use out of them.

I know how this sounds, but I’m not trying to take credit. A lot of these 4th-edition innovations probably developed organically at a lot of game tables where house rules were reshaping D&D into the right game for the local players. I’m simply happily surprised to see D&D shift more towards my style of play. I didn’t expect that.

The single greatest change to the game, however, must be its systemization philosophy. D&D has shifted from a strict procedural model of mechanics, in which prescriptions must be observed and processes followed to generate pre-approved statistics and mechanical relationships to a black-box model. This is true mechanically, in the flexibility of the new system to adapt various environments and monsters to the vision of the DM rather than the DM fulfilling the vision of particular monsters’ mechanical specs, but it gets even better than that. D&D 4E more elegantly applies the black-box model to its narrative. 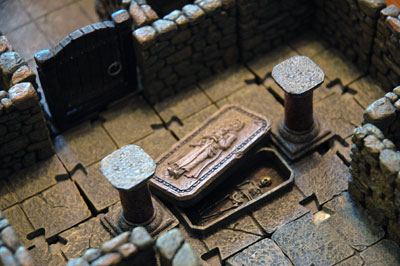 D&D 4E uses an encounter-based structure that actually lends itself quite well to narrative gaming and non-combat encounters. This crypt is the secret to ending one encounter (just close it up) and starting the next one.The new rules specify the mechanical outcome of particular actions without restricting exactly what those outcomes must represent in the game world. We know that this Rogue power moves enemies around, but there are a lot of ways to describe and characterize that process—one Rogue may manhandle her enemies while another lures them here and there. Information goes into the black box (“I use the Deft Strike power.”) and information comes out the other end (“It succeeds, and I move the guy over by the fire pit.”)

In the middle, inside the black box, two things happen: Die rolls determine success or failure, and the players (including the DM) decide how to visualize the action. The DM is in the black box, and its within that marked-off area that the narrative and roleplaying elements of the game can thrive without so many mechanical restrictions. That’s fantastic.

What makes this easier on everyone is the new language of D&D—keyword-driven, more casual, but loaded with jargon that makes it easier to convert one’s imagination into game terms. Once again, D&D is a language for describing and resolving adventure tales, rather than a system for defining the nature of the fictional world. It takes your imagination and translates it into a common tongue—D&D—that enables all players to make sense of each other’s vision. It’s what I dig about RPGs, and why I like systems that leave room for storytelling rather than strictly detailing the tone or look of the game.

I couldn’t help it. I had to tinker with D&D rather than just run it out of the preview adventure book, Keep on the Shadowfell. Tune in on Monday for my adaptation of the adventure into a small collection of encounters culled from throughout the adventure. You’ll see just how badly I screwed it up, and just where we found the fun, despite some disastrous outcomes.

So it looks like D&D 4E and I are going to be a good fit. So good, in fact, that should the forthcoming Game System License (GSL) be any good, I’m considering launching my own little start-up for producing 4E-support materials based on yet another campaign setting of mine. The trick, though, is in finding a new model for presenting and selling a campaign setting—something that’ll hold my interest and look different than the rest of the marketplace.

The good news is, I’ve already got a model in mind. The bad news? Who knows if it’ll pay for itself. Either way, it’s the early days of a new edition, and I love this part of the era. 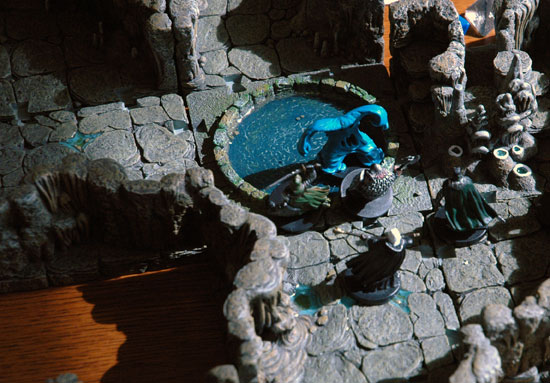