For a while, back when, I thought I might run a short chronicle of Mage: The Awakening, set in White Wolf’s hometown of Atlanta. I never did. The core principles of the chronicle were sound, though, so I share them with you now, in the hopes that they’ll stir you to make use of them as I could not. This is just a sketch, mind you, with a minimum of proper nouns and story-level conflict built in. But the overarching conflict is good.

Remember, this stuff is fiction, offered here for entertainment. 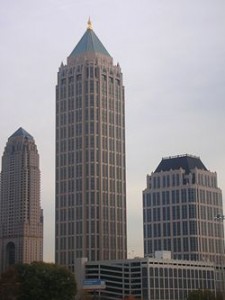 Mage symbology is dominated by two repeating themes: towers and five-pointed stars. Atlanta has two iconic neighborhoods that fit the second theme: Five Points and Little Five Points. Meanwhile, the city’s skyline is, of course, a serious of towers, but two of them in particular caught my eye — both have pyramidal summits, both were (or are) the tallest buildings in the city, and they stare at each other across much of Midtown.

Putting the two together somehow seemed an obvious fit, so that’s what I did.

Mystic power is trapped in the earth, moving through it along key channels and courses not just through the ground but through our perception of space. Certain points — roads and crossroads especially — act as anchors of power. Call them intersecting ley lines, if you want. Call them vortices. Whatever word, their powerful augmentation tools for wizards and their spells, so mages tend to battle over this kind of turf.

Atlanta’s practically centered on a crossroads called Five Points, where roads have been crossed on the earth since before the city was there, back before Europeans arrived. Now, not only do streets cross there, but it’s the major passenger-rail hub for the city, too. The city even used to be named for this hub: Terminus. That’s a lot of lines crossing in one place.

To the east, outside the shadows of the high-rise buildings, is Little Five Points, a hipster go-to place for indie record shops, vintage clothes, tattoos, and incense. The place is also home to some destination bars, like the famous skull-faced venue, The Vortex. That’s right, there’s actually a place, at the center of this mystic five-pointed crossroads, called the Vortex — it’s like a signpost to other mages. Or maybe it’s a dare, to talk about Awakened things right out in the open.

Little Five Points fills up with suburban teenagers and bar-crawlers on the weekend nights, and all of that movement drawing them toward the crossroads (just like the train line passes people through Five Points) helps give the place power. It’s like mystic friction generating a charge, even if the people passing through are Sleepers. It’d be easy to say that these intersections are each home to a cabal, or maybe they’re the meeting grounds for the local Concilium.

What really matters is that, in the battle for Atlanta’s mystic juice, the five-pointed sites are the horizontal battlegrounds. Whoever controls them controls the rate at which mystic power flows through the city. Whoever controls the Points can influence the quality of Mana in the city. Each site grants bonuses to certain Arcana, maybe, and augments the powers of mages from the five Orders.

To dial the magnitude of that power up or down, we turn to the vertical…

Atlanta’s skyline is a battleline in a secret war. The city’s two tallest buildings were crafted for the purposes of harnessing arcane power and channeling Supernal might down to the terrestrial realm — to make the mages who command those towers as powerful as possible. Each of these two tallest buildings is capped with a pyramid, carefully aligned and designed to maximize the effectiveness of spells cast within them. 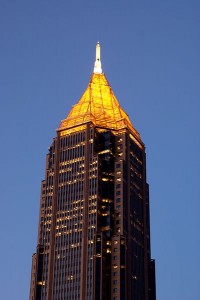 The first of these arcane towers, built in 1987 and known to sleepers as One Atlantic Center, is capped by a stepped pyramid, inside of which is the sanctum of Atlanta’s once-most-powerful mystic architect. It’s like a classical temple inside, with pools of water and flaming torches and big stone columns plundered from ancient Atlantean ruins, all hidden hundreds of feet above the Big Peach. It’s timeless and powerful, but the wizards who operate out of this site believe their place on-high has a staying power it might not. They don’t believe technology can augment magic enough to overcome or defeat pure gnostic wisdom. They believe they’re playing a longer game than their foes have planned for, and they may be right. Maybe.

The Bank of America Building was built in 1991 to surpass One Atlantic Center and usurp its signal from the heavens and power over earth. It is capped by an enormous glass-and-steel pyramid that glows gold in the night and seems to hover like a shining, floating temple in the fog, when the building below seemingly disappears. (This actually happens. It’s spooky.) The inside of this once-hypermodern sanctum is a nest of hidden rooms wired with high-tech surveillance (of the city below) and signal intercepts from local cell-phone calls and Internet activity — the kind of surveillance that’s possible when magic and technology interact. It’s all aging rather poorly, actually, and starting to feel a little last century, but the power underneath the aesthetic is undeniable. Still, it’s only a matter of time until a technical upgrade is necessary, just to minimize the risk of being outclassed by other surveilling wizards.

These towers are the vertical power base in the city. From these profound perches above the sprawl, these wizards can interfere with the flow of magic through the Points, monitor the city’s magical activity, and perhaps influence the mystic potency of spells cast beneath them. They’re like radio towers, at once empowering earthly magic through their sympathetic evocation of the Watchtowers, and simultaneously channeling the interference and punitive power of the Exarchs down from the Supernal realms…

Spoilers! Setting Up The Chronicle

…for the towers belong to the Seers of the Throne, who have secretly all but conquered Atlanta. 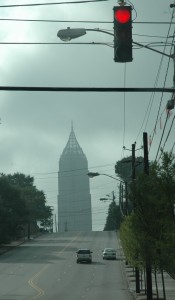 Photo by Will Hindmarch

The player characters in this chronicle are newly Awakened mages who have been found and recruited by spies in a mystic war. Their mentors are Exarch-worshipping Seers of the Throne, filling the characters heads with lies and half-truths, preparing to insert them into the lives of Order mages in an effort to undermine, expose, and destroy them. The Seers are just two cabals away from controlling Atlanta utterly: Five Points and Little Five Points. With those cabals eradicated, the Seers can look down from their towers and pick off or recruit the newly Awakened one by one, as they wake. Countless lives will be ruined, and the city will serve as an anchor drawing the Fallen World further down into mundane powerlessness at the feet of the Exarchs on high.

Even the battle between the towers is a lie. It’s mere rivalry. In time, the Seers hope, there shall be five such towers in their control. If they can place one at each of the five-pointed sites, they’ll have a profound sympathetic power over Order mages. But it’s a long-term game they’re playing. First step: destroy the mages alive and operating in the city.

The players’ characters are to be the murder weapons.

To me, Mage: The Awakening‘s closest cinematic relative has always been The Matrix, what with its two worlds and top-down imposed rules and awakened mystics transcending the rules of the land.

I wanted the act of Awakening to be more than just the catalyst of the chronicle. I wanted to give the Seers some insidious teeth. I wanted the players to have to actually fight through some lies in pursuit of truth. I wanted a specific landscape that felt oppressed and needed a dose of fierce, revolutionary magic. I wanted there to be two awakenings: the characters awakening to magic, and the players waking up and seeing through the lies the Storyteller told them.

The trick to making it work, I think, is to make the Seer mentors likable. Not over-the-top likable, but genuinely human people. The players have to feel bad when they turn on them, to make the choice meaningfully difficult. The players should hope that there’s some way to rectify their situation that doesn’t call for them to hurt a lot of people — and their hopes should not be answered. They either destroy or banish the Concilium mages who tell them the truth and work to free humanity from the Exarchs, or they side with the Seers that gave them some power and brought them up and treated them good, but also lied to them in pursuit of a plan to enslave not them, but everyone else.

The chronicle’s meant to challenge the characters and the players both. For the characters, the question is whether or not they can succeed at destroying the “evil” cabals of the Five Orders… or if they can pick the right battle, suss out the truth, and break the Seers’ hold on the towers and the city. For the players, the challenge is probably to suspend their knowledge of Mage lore enough to play their characters true — acting only on what they’ve been told by their mentors and the Order mages who fight back against them. If the players are new to Mage, and don’t know much about the game’s mythology, then the challenge is to actually discern the good guys from the bad, the liars from the truth-tellers, and pick sides in the battle. (Or not — they could always go rogue.)

If you try any of this in action, let us know how it goes.