A while back, I asked, “Where is the D&D App?” and a few of you answered. One of you being Mike Pattee, developer of the i4e app for iPhones and iPods Touch. Full disclosure: this short review is based on a complimentary copy of the app, from Mr. Pattee. Further disclosure: I don’t own an iPhone or an iPod Touch — I played with the app on a borrowed device — so it’s entirely possible that there’s some secret jargon or traditional facet of app-analysis that I just don’t get. Forgive my n00bery. 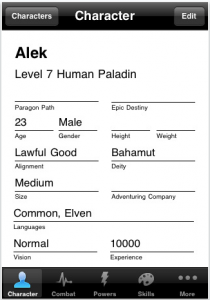 For example, I don’t know if i4e’s interface is pretty much app standard, but it’s real nice. It has great action. Flipping through powers feels right, with each one coming up like a color-coded card, and a lot of the vital information for the power is right there in the same familiar format you’d get from a paper character sheet.

As a player who sighs every time I have to boot my Mac into Windows mode to us the damned Character Builder, seeing D&D’s familiar elements presented in handsome, iPhonesque style was a treat. The D&D 4E character sheet turns out to have a lot of moving parts, when viewed as an app, but i4e never lets that get overwhelming. It’s easy to use.

Right away, though, we see the trouble with the older version of the software: the power description isn’t present, and editing it back in with that tiny iPhone keyboard may well be a deal-breaker. This is what the turned off the player whose phone I was borrowing — without power text, why bother abandoning your paper character sheets at all?

The older version of i4e offers a few more reasons why you might stick with the app, beyond just the handy futurism of having an interactive character sheet in your pocket, with features like trackers for hit points and healing, experience points, and all that. That, plus condition tracking, would make i4e interactive enough to feel like it’s almost the living character sheet I’ve been dreaming of. It’s not all the way there, yet — I still want for more visual real estate to be accessible at once, so iPad to the rescue — but i4e seems to marching toward intuitive stat-handling and character-tracking that I want out of computer-assisted tabletop play.

It’s the forthcoming i4e v2.0 that looks like it really solves the power-text problem. Characters can be easily imported from DDI Character Builder files, via i4e.cordax.net, and then modified using a web browser (and a full keyboard, thankfully). It sounds like power text can be altered and then pasted right into the character.

The new version also adds in that coveted condition tracking, as well as numerous other features. According to Mike, we can look forward to the following in i4e v2, which should appear in the app store any day now:

I may still be dazzled by iPhones in general, but I think i4e is worth the money if you’re comfortable tapping your way around an iPhone or iPod Touch. With the exception of the power-text issue — surmountable with a bit of work — I think there isn’t much wrong with i4e that an iPad can’t fix. Just having that additional visual real-estate in hand would be a great boon for the app, I think. Otherwise, this looks like a great contender for the interactive character sheet I’ve long sought.

Get more information on the app at its official site (check out the and see reactions and commentary in this EN World forum thread. Want to pick it up right now? Here’s i4e in the App Store.