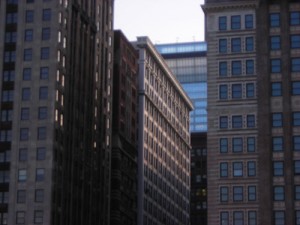 Each roleplaying game is a city.

This is what I’ve been thinking about as I’ve been turning over definitions of roleplaying games and story games in my head, these past few days. RPGs and cities are two of my favorite things to read about and explore. I love them for their emergent beauty and their complex identities. They are things made up of multitudes.

An RPG, like a city, has many inhabitants who may love the place for disparate reasons, see it different ways, live very different lives amid the same avenues and structures. We may not travel the city in the same way, we may be visitors or residents, we may support different teams or be regulars at different pubs—we may even think the other is not getting the proper local experience. Yet we are neighbors.

Each game has its own character and history and internal geography. We can say that your hometown and my hometown both have grids or boulevards or grand plazas and that helps us understand each other but it doesn’t attempt to wrap up the whole city, to contain it, bottle it up, or define it. We can say that one city has a lot of beautiful bridges and another has cultivated a dazzling skyline and appreciate both for their own charms without damning the other by comparison. We can prize one city’s grand plaza without reaching the conclusion that cities lacking identical plazas are “broken.”

Cities may have common climates, similar architecture, interwoven histories, while at the same time being too complex and too full of myriad tales, intersecting stories, moving individuals and unmeasured networks to be easily appreciated through summary. The planner who lays out the park can’t know how many couples will propose marriage inside it and how many will break up on its benches. Your London is a city of first loves, awkward kisses, and blurry first dates. Mine is a honeymoon spot, that place where I saw the big dog trapped at the bottom of tube escalators, where I ate a sandwich in the rain outside the Tate.

We don’t actually attend places, we inhabit places and times together. Our experiences—happy or sad, precious or common—may be statistically uncommon but no less genuine. I’ve been robbed in San Francisco and that does not make it a city of thieves and nor does that get me my stuff back.

Roleplaying games are likewise vast and experiential and emergent and poorly rendered through categorical descriptors. We talk about cities by sharing details, by offering advice, by giving directions that may not be the only ways to reach favorite spots. We can report on population density or elevation or annual rainfall and get one sense of a city but that is not the same as meeting people from that place and that is not the same as going there.

Successfully defining the word city (Oxford American tells me it means “a large town” or “an incorporated municipal center”) does so little to tell us what cities are actually like. If I say “Picture a city” and you picture Istanbul and I picture Tokyo we are both right. One is not more representative of the form than the other.

We can bullshit about populations and histories and skylines, we can defend our favorite city over beers, we can insist that New York is more quintessentially this and London is more iconically that, but none of those things takes us to the place and introduces us to the people and feeds us the food. Our citizenship can be long-standing and loyal, our dedication true, but none of that establishes our expertise over the form. Understanding the electrical grid of Miami doesn’t improve the plumbing in Cairo.

It seems to me that so many arguments about RPGs devolve into geographical trivia mistaken for indicators of quality. You say Chicago is a certain distance from Atlanta and I think it’s probably not that far. We could curse each other’s names over it yet, if we were together in person, chatting over drinks, I imagine we’d say something like, “Well, whatever, the point is, there’s this great bar I love in Little Five Points called the Porter, and if you get the chance, you should go there.”

Atlanta doesn’t become more Atlanta-like or “better” than Boston if we establish exactly how far either is from Tulsa. The yardage between burgs doesn’t tell us that much about the cities themselves. It doesn’t help us understand what a city is.

How far away is Apocalypse World or Night’s Black Agents? Depends where you’re standing.

Is your new game walkable? What do I care—I like cars, I like trains, and I’ve got time.

What’s the tallest building in Eclipse Phase? How high is Burning Wheel above sea level? Is that new Marvel RPG on the Gulf Stream? Did you know Mutants & Masterminds has more parks per capita than Technoir but that Technoir’s got citywide wifi? You know, D&D stands on the site of an ancient fort where many bloody battles were won.

Go to the places. See the sites. Come back and share your perspective, your photos, your stories. Love the cities you love. The cities stay cities, no matter what we say in this pub.