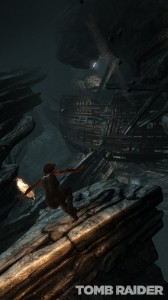 If you’d asked me before, I would’ve been skeptical. Another gritty reboot, this time of Lara Croft, a character whose confidence and poise under pressure was part of the hook? I know people who hated the twists on Bond in Skyfall.

It’s not that I would’ve doubted whether there’s a great idea for a character-driven, narrative-driven adventure game in there, it’s that I’d doubt whether the realities of modern big-budget video-game production would be able to pull it off in the face of demographic data and audience testing and brand protection.

(I’m not just talking about the much-publicized controversial and problematic elements of the game’s promotion and production. In fact, I’m not talking about those elements in this review at all — I’m reviewing the game as it was during actual play for me, for whatever that’s worth.)

Making this game required facing some tough hurdles, like making a bad-ass character into a human character without undermining the badassery, if you will. The cunning within the new game’s approach, in my opinion, was that it didn’t really try to leap the more general hurdles. It focuses the game on a specific story, following a popular character through a particular arc, and pays attention to the needs of that story. I can’t say that this Tomb Raider damned every torpedo but I feel like it aimed to stay true to the story it wanted to tell. It’s a shame that story is so grueling and cruel.

Tomb Raider humanizes Lara Croft in a way that could be seen to undermine her bad-ass nature if you think of bad-asses as being necessarily or completely superhuman. So, it seems to me, the developers at Crystal Dynamics didn’t quite aim to clear those hurdles. Instead, they pursued a different path and aimed for a different game with a different voice and style. They bet that an audience exists for this game, this story, this experience.

I hope that bet pays off and I hope Crystal Dynamics learns the right lesson if it does. Here’s why…

While I quite like a lot about the new Tomb Raider, I found it more harrowing than fun in ways that almost made me stop playing. It’s a gruesome, vicious game sometimes. I could do with a sequel that’s less interested in violence and gore.

How gritty is this reboot? I’m filing this review under the “horror” category. Tomb Raider is about survival, yes — in horrific situations. This says a lot about the resolve and strength of Lara Croft, I admit, which makes me simultaneously understand how the game arrives at its over-the-top gore and also feel that it should be unnecessary in a sequel. Now that we’ve seen the crucible that Lara survived to become an ultra-resilient (anti?)heroine, let’s skip some of the viscera in the next one.

Because, seriously, while I find the skeletons of previous unfortunate explorers and travelers to be suitably spooky for perilous archaeological adventures, crawling through rivers of blood is more gore than I needed in this kind of game.

I mean, I can’t blame the friends of mine who saw death animations on YouTube and decided maybe this wasn’t the game for them. While I suppose those animations are motivation not to screw up the most tense action sequences, they’re pretty gross.

I say this because I feel like the really great gameplay of Tomb Raider — the action and adventure that I kept coming back to experience — is in its exploration, its running and jumping, and its little discoveries. The archery and gunplay and brutal melee combat are all well-done examples of what they are, but somewhere around the halfway point I’d had just enough of the combat. My hunger for beautiful (or grimly morose) environments to explore was still stoked, though, so I waded through desperate battles so I could get to the next exploratory bit. 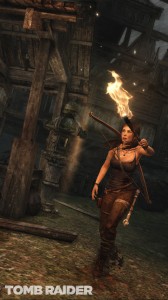 For all that the game is about grit and dirt and blood and fear, for all that Lara is frequently sliding down ravines or dangling by her fingertips, the game handles with great certainty and control. While Lara’s leaps show that she’s giving it all she’s got, the game handles with ease, making it terrifically fun to jump, climb, and balance on dangerous edges at ridiculous heights. The physics of the game put fun first. This could work at odds with the game’s grim tone, but instead it reminded me that there’s a heart of adventure here. That runs in the face of Lara’s humanity, sometimes, but is handled in a way that feels like we’re following her from a place of human survival to a place of superhuman action.

The combination of harrowing visuals and audio design with great controls and environmental details allow for desperate sequences that feel harder than they are in hindsight. It doesn’t feel like I’ve moved a thumbstick to the left, it feels like I’ve rolled away from a crushing boulder. Pressing the blue button to grab an edge feels like I’m lucky to catch hold in time, even though the trip to the blue button’s not really that far. The experience is well calibrated.

When you get near a waterfall and the mist beads up on the screen? The way a campfire’s light streaks in the lens? I love that stuff.

And yet Tomb Raider’s experiential details help it to feel like a game that makes character count. When I was spending skill points to unlock survival techniques, relic-detection abilities, or vicious finishing moves, I felt like Lara was changing as a character. Part of this hinges on small details like giving Lara voice-over dialogue when she sits down at a camp to train, giving an added dimension to the narrative and the character at the same time. Part of it is the way the game systematically builds up options, confining choices at the beginning and expanding them over time in a way that feels logical and derived from the fiction (even though it’s probably a gameplay decision first).

It’s the little things, adding up, that make Tomb Raider work so well in the face of its grosser tendencies, for me. I’ve seen derelict bunkers and burning buildings and rusting shipyards in adventure games before, but there’s a narrative drive to it all here that kept me playing even when it left me squeamish. I’m eager for another, different game in this series. 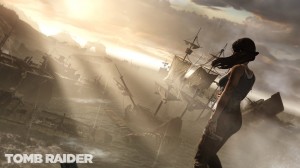