The Voice of the Northsea Saga

This is about inspiration. This is about narrowing down an infinite array of potential attitudes and ideas into a smaller headspace, a common playground with a common language — someplace where I can say the word viking and conjure the right kind of image. This is about getting our instincts and imaginations to overlap, so we can communicate quicker, visualize sharper, and play together.

This is a primer on some of what makes my current D&D campaign what it is, presented for two purposes: First, because I like to talk about what I’m playing. Second, because I want to talk about how we translate inspiration into a play space.

I’ve given the campaign the underwhelming but somewhat telling title of The Northsea Saga, and I’ve described it on Twitter as “Brian Wood’s Northlanders versus Tolkien’s Lord of the Rings.” This post isn’t much concerned with the fantasy lore I’ve cooked up for the campaign — that’ll come later, if you’re interested in it — but about the bloody battleground inspired, to me, by the hard intersection of these two very different sources: one lyrical and one vulgar, one classically poised and one frankly brutal. This is what I’m after, and this is why.

In short, it allows game material from a few central books, plus the Skill Powers forthcoming in Player’s Handbook 3.

That lackluster name, The Northsea Saga, is meant to plainly evoke some of what the campaign is based on: the classic Norse sagas, and folklore concerning the people, places, and legends that somehow contact the North Sea and the North Atlantic, even when that folklore is as far removed from real-world history as Tolkien’s Elves. This means I’m drawing on the mythology, geography, and general climate of Scotland, Iceland, Greenland, and Scandinavia, plus a bit of Norse cosmology (put through the filter of fantasy) and some whole cloth invention. This is still a D&D campaign, after all; it has to explain where dragon-people come from and how magic is viewed by the everyday populace. (For example, the Northsea Saga’s equivalent of the Skraelingar will bear only a slight resemblance to any real-world peoples.) These are all in addition to the Tolkien and Wood inspirations, obviously.

(To be honest, if I thought this was something more than a simple home-game, I would’ve given it a richer name. But this is what came out when I needed something to fill an empty field in the D&D Character Builder software, so there it is.)

Why these two sources? What is it I’m hoping to borrow from each and what is it that I’m hoping to end up with? Let’s start at the beginning — what do I hope to capture from each source and deploy in my own adventures:

From Lord of the Rings

You know what Lord of the Rings is — it’s a sprawling legendarium mixing pastoral charm with epic menace. It’s part Norse saga (especially The Silmarillion) and part proto-fantasy travelogue adventure. Here’s what I wanted to take from it: 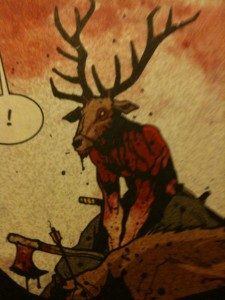 One player based his character on this image from NORTHLANDERS Vol. 1.

You should be reading Northlanders already. It’s a sprawling anthology series of Viking-age crime tales, violent and dirty, with eyes wide open and a deep, rattling roar. It’s part Norse saga and part noir, with complex characters. Here’s some of what I wanted to take from it:

What good is it to draw out these inspirations and highlight the ways they clash? It defines the boundaries of our dramatic palette. On this end, we have Tolkien’s refined and classical fantasy. On that end, we have Wood’s heightened realism and human plight. In between, we the players have two touchstones within ready reach, with which we can render a variety of characters, situations, and scenes. We can use these touchstones as immediate shorthands to convey a lot of atmosphere in a quick moment, or we can use them to set up expectations… and defy them.

It’s not just that these styles are both present, though. It’s that they’re at odds. We slam them together to make sparks.

We confront Galadriel with a dirty, insane Viking with an elk-head cloak and see how the scene plays out. We take the Earl-succession struggles of The Orkneyinga Saga and put it against a backdrop of Sauron’s ticking time-bomb and see if humankind splinters or fuses. We simply smash the palettes together and arrive at new imagery and character concepts to explore.

Both The Lord of the Rings and Northlanders have distinct visual styles that we can draw on during play. In our first session, when a troop of Dwarves was summoned down out of the rocky hills by our beautiful she-elf wizard, name-dropping Alan Lee pretty quickly set the tone for their arrival. The players’ characters, though, are rough and odd, the survivors of a Viking shipwreck — one of them is even based on a panel of art from Northlanders volume one: “Sven the Returned.”

What I mean, then, when I say Alan Lee versus, for example, Northlanders #17 artist Vasilis Lolos, or “The Shield Maidens” artist Danijel Zezelj, isn’t that there will be any kind of victor. Instead, what I want is a conflict in our imaginations, so that instead of just settling into familiar visual tropes, we’re actively engaging our minds’ eyes and wondering, “What would that look like?”

When a character painted by Alan Lee enters into a landscape painted by Alan Lee, it all fits together. But when a character from Northlanders is confronted with a tangled Alan Lee woodland, or tasked with navigating one of Lee’s watercolor highlands, we don’t know what to expect. This isn’t just exciting, it’s freeing. Players can speculate and invent what might happen, rather than feel like their emulating What Tolkien Would Do.

Combat is a major facet of D&D, and both of the properties I’m drawing from approach combat differently. Take Tolkien:

“But a small dark figure that none had observed sprang out of the shadows and gave a hoarse shout: Baruk Khazâd! Khazâd ai-mênu! An axe swung and swept back. Two Orcs fell headless. The rest fled.”

In comparison, we have Brian Wood’s detailed description from a Northlanders script page:

“More spinning counter-moves. Egil makes another rotation, letting the weight of his sword and centrifugal force whip it around. But Snorri has backed up and the sword is six inches short of his throat.”

— Brian Wood, from the script for Northlanders #17

The battlements of Helm’s Deep don’t exactly run slick or sticky with spilled blood in Tolkien’s prose, though presumably there’s plenty of blood when Gimli decapitates his enemies. Tolkien doesn’t mention it, though.

Tolkien often glosses over combat. (E.g., The Two Towers: “[Gimli] soon had work enough.”) In contrast, Brian Wood dedicated a whole issue of Northlanders (#17: “The Viking Art of Single Combat”) to a bout of armed combat between two characters we’d never met before. Here’s a page from issue #17 (click for more, bigger pages) — notice the difference in battle-cries between these blokes and Gimli son of Gloín, above: 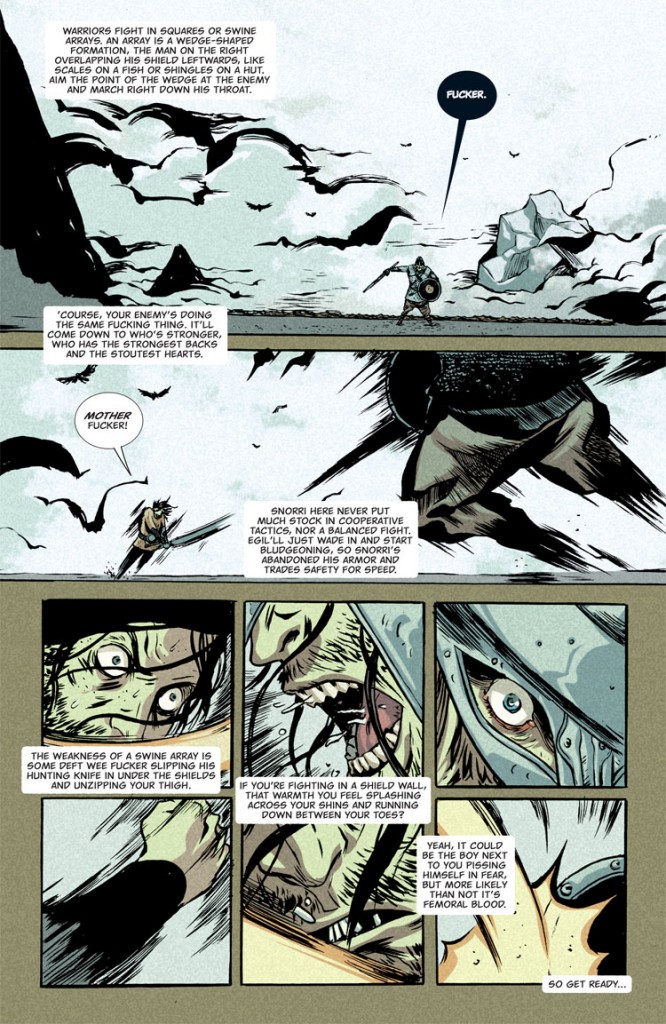 A page from NORTHLANDERS #17

This strikes me as being something closer to the nature of a D&D fight than Tolkien’s few sentences. At the very least, it better serves the venue — a DM must be ready with descriptions for violence and its consequences for almost every action the PCs take in battle. A DM needs a lot of details ready in mind to deploy throughout the fight, from the smell of dirt kicked up during a charge to the sound of blood raining on a flimsy shield. 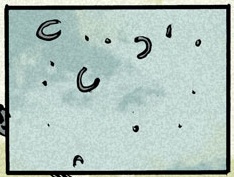 Broken links of mail arc through the air, from NORTHLANDERS #17.

I can single out one of my favorite panels in and issue of Northlanders, and it pertains to this very thing. It’s a panel showing broken links of mail (aka chain mail) in midair, cast off a metal shirt by a sword-swing. This one detail brings the battle alive in a way that Tolkien’s more civil descriptions don’t.

Having this variety of action available is important, not just for the DM but for all the players. Different characters fight in different ways, and not every round of combat is out to achieve the same effect.

The whole character of violence in the Northsea Saga can run the gamut from brave confrontations with almost certain death to tactical, desperate attempts to just survive this fight, depending on the circumstances. One week, the stakes might be right for the players to pit their characters against great evil, no matter the cost, like Tolkien’s men of noble bearing. The next week, the players may just want to survive an unlucky battle and hold onto their characters for one more week. Sometimes the gory lunge, piercing through armor, flesh, and bone, is the right dramatic fit, but sometimes we just want a flash of magical fire and four quietly smoking goblin bodies. By having both sources to draw on for inspiration, we have room to make choices.

Compare Tolkien’s heroes at the Battle of Helm’s Deep…

“‘The end will not be long,’ said the king. ‘But I will not end here, taken like an old badger in a trap. Snowmane and Hasufel and the horses of my guard are in the inner court. When dawn comes, I will bid men sound Helm’s horn, and I will ride forth. Will you ride with me then, son of Arathorn? Maybe we shall cleave a road, or make such an end as will e worth a song — if any be left to sing of us hereafter.'”

Why not come home when you can come home, farm a couple hectares, develop a really epic potato wine recipe and live to see your grandchildren toddling about?

Why go at a battle, unthinking like an idiot?

The spirit of Northlanders seems a better fit for the potentially (charitably) picaresque “heroes” of a D&D game. The point, though, is that we need to accommodate both sorts, because individual PCs are different, individual combats are different, and not all fights are worthy of noble sacrifice. D&D characters see a lot of combat, and it can’t all be for the fate of humankind. Northlanders gives us an idea what the everyday battle might be like — and what kind of thinking it might take to live a life of summers spend viking, of summers that make you either wealthy or dead.

Why Say All of This

Hopefully, this kind of explicit examination of inspiration helps us players collaborate as co-creators. Since everything we’re rendering in play is projected only on the inside of our own skulls, but calls for us to share some kind of common vision, this kind of common language is a precious time-saver. We’re not talking about horned-helmet Vikings or noble gilded Thor-like gods, here. We’re talking about people — sometimes desperate, brutal, ugly, proud, dignified, honorable, or savage — who go a-viking to change their lives. We’re talking about people struggling to survive a nasty world made all the nastier by fanged wyrms and a treacherous Witch-queen. We’re talking about brothers fighting over land and titles at the same time that we’re talking about brave adventurers fighting against inhuman hordes for the fate of innocent lives. We’re exploring what happens when we combine bravery with brutality.

What exactly lies at the intersection of Northlanders and Lord of the Rings isn’t clear, and that’s the point. An RPG campaign, like a TV series, is a question, not an answer. Every week we’ll pit these two worlds against each other and see what happens. It won’t always be pretty… but thank heavens for that.