The new Splinter Cell game hinges on a game mechanic that I expect to get a lot of flak. It’s being called “mark and execute,” and I think I love it. Here’s a bit from a GamePro interview with Maxime Beland, Creative Director at Ubisoft Montreal, which explains a bit about the mechanic:

The way it works is that you need to do a single hand-to-hand kill, and that gives you a single opportunity to mark and execute. The economy for it is really simple; you either have it or you don’t, and once you’ve used it, it’s gone. It’s very gamey. There’s no logical reason at all that I could try and use to convince you that Sam needs to touch an enemy before he’s able to do three headshots in a row, and in that regard it breaks our ‘realism’ rule, but it works well in the game. 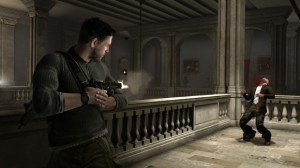 This mechanic asks the player to think tactically, to use the mark-and-execute economy to find his own rhythm of play, engaging individuals directly so he can mark and execute more complicated maneuvers after. It puts you into the head of Sam Fisher more than the body. You have to think like him, but you don’t have to be as quick and precise as Fisher is supposed to be.

Simply: Sam Fisher is better at his job than we are, and this system makes that fun.

Instead of struggling against AI-driven NPCs to pull off complicated maneuvers (or stumble through hostile situations), we are designing action sequences starring Sam Fisher. The challenge is in positioning and timing, not in performing pixel-hunting headshots ourselves. I like that. Actually, I think I love it.

Years ago, when I was on a spy/heist/detective kick, I sketched out a controller scheme for the Xbox that would involve positioning a Mission: Impossible-style team and then activating each team member with a button press. Each member, a different button. It would have been a sort of a suspense-thriller split-screen stealth sim, which each character’s expertise reliably deployed with a single well timed button press. I eventually cooked up a more refined version for a detective-action video game, and then lost the notebook for that in the move from Minnesota to Georgia, years ago.

But I knew two things about that system: First, that a number of players wouldn’t dig it because it didn’t involve fighting or bluffing directly — it distilled dialogue trees and hand-to-hand combat down to authorization. The player was supposed to be the team leader, getting the team into position and then saying, “Go.” Second, I knew that it would be a good long while before I was in a position to try and make that game.

Now here comes Splinter Cell: Conviction, which does it for me, on a more personal scale. 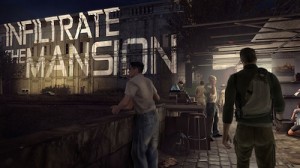 Conviction is all about putting you into the head of Sam Fisher, more so than his body. The game projects his thoughts onto the walls and surfaces of the game world, turning literal space into a figurative, psychological terrain at the same time. (This is not unlike how briefings were handled in the now-defunct Tomorrow War; it’s like this game was made for me.) That’s an excellent solution, both for keeping the HUD simple yet ever present and for creating momentum and atmosphere. It’s fantastically moody.

By detaching the gameplay from the realism that’s used to convey atmosphere and character in the setting, the creators of Conviction have found a clever way of servicing both play and story, separately yet simultaneously. Players are submerged into Sam Fisher’s perspective and style, yet at the same time there’s a kind of cool disconnect, as if Sam Fisher — in his own grief over his daughter’s death — is somewhat detached from himself. I think it’s brilliant, but I’ll know better once I’ve been able to play more than the demo and read more than a few interviews.

In the meantime, I wait for the delivery man to bring me my copy of Conviction and I go back to sketching mechanical notions for a stealth-based paper RPG.