The Pyramid and the Web

Part of the point of my still-evolving thesis (first mentioned in my early post, “On Playwriting, On Gameplay”) is to develop a new vocabulary for branching or unfolding narratives — something loose enough to survive spit-balling and rough use, but rigid enough to be clear and evocative in serious discussion. A lot of the ideas wrapped up in this vocabulary are not new. They should be familiar to anyone who’s studied dramatic structure a bit, understands the Three Act or Five Act structure (see Jeff’s series on the Three Act form), or has dabbled in narrative studies.

Once the page has finished loading, click any of the images in this post to activate the gallery. Navigate using your keyboard: N=Next, P=Previous, Esc=Close the gallery.

In subsequent entries, we’ll look at the unique ways that games — board games, card games, and especially roleplaying and story-making games — can use these terms to describe and make new sense of real-time storytelling play and dramatic manipulation at the design level.

Sound high-falutin’? It is a bit. Pretentious, too. But I take this stuff seriously and if you’ve played RPGs, you’ll see right away how these terms can be useful in the dirty minute-to-minute activities of running a game.

I’m using the term “GM” in here instead of “DM” or “Storyteller” or “Narrator,” though these terms are traditionally synonymous. GM is simply the generic term for the player who designs and “runs” an RPG adventure. Don’t confuse it with the newer MMOG definition of GM, which is different. And thus confusing.

We’re defining two bits of jargon here, neither of which is especially groundbreaking but both of which facilitate further discussion of narrative (not just plot) and dramatic tension (not just Act structure) in games. These terms are good for analyzing games you play and for creating gameplay moments, whether you’re a video-game level designer, a board-game creator, or a GM.

First up is the gameplay web. After that, we’ll look at a dynamic modernization of Freytag’s pyramid, modified for use in branching fiction and interactive storytelling. This new schematic structure measures narrative and emotional tension as dramatic elevation. 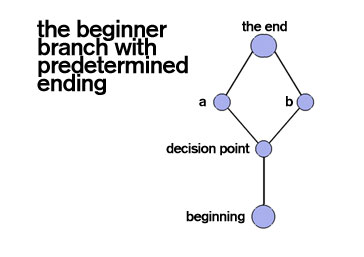 (The next chapter in this series, “Dungeons & Diagrams,” looks at gameplay webs and dramatic elevation in classic dungeon-crawl play.)

The paths or transitions (b) are the linear elements between decision points, which is an intentionally big and vague definition; they can be passageways or exposition, as long as inches or miles, corridors or continents, seconds or decades. The space between one decision point and another might be filled by a quick cut skipping over miles and days of travel (“When you reach the castle,” says the GM, “you have a choice to make.”) or it might be a winding catacomb marked out in five-foot squares and traversed with miniatures on a map.

We have a starting point but no ending point because we don’t know, when the web is created, what the end of the game story will be — the players’ choices at each decision point could lead to an ending at any point on the web.

Predetermining or scripting an end to an RPG adventure is a beginner’s method, perpetuated by the necessary nature of pre-written and published game adventures from back in the day. A published adventure needs an ending because it’s read as much (or more often) than it is played through, and its built-in ending makes it easy for the GM to identify the climactic moment of the story, and thus the rise of dramatic tension leading to it. By separating the established play space from the unfolding story’s dramatic elevation (see below), we’re better able to react to player choices in the moment and create an atmosphere of rising action without being tethered to some preconceived notion of an established plot.

Let’s look at a beginner’s gameplay web (Image 2 of 6), reduced down to an elementally small scenario. Players at the beginning progress to a single decision point, resulting in one of two possible outcomes: (a) and (b). Though different obstacles and choices may be put before the players in scenes (a) and (b), these are false decision points because there’s only one possible outcome, regardless of what decision was made back at the first decision point — all roads lead to the GM’s predetermined ending. This creates the illusion of freedom (which is sometimes enough) but is only a little better than being an audience member. It’s like watching a movie and then, on the DVD, learning that there was an alternate action sequence in the middle. The suspense of an inevitable ending is one possible way to ratchet up dramatic tension, but it doesn’t take advantage of the unique options of story-games and interactive narrative.

In a future column, we’ll look at how gameplay webs function on the fly, as part of improvisational play (short answer: very well), but first, let’s put the length and width of a gameplay web together with the height of dramatic elevation so we can get some altitude. 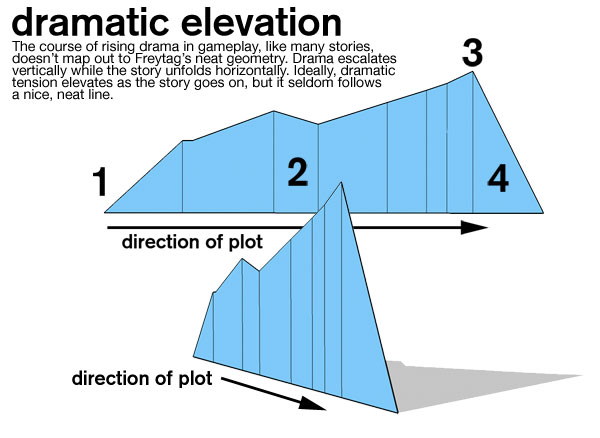 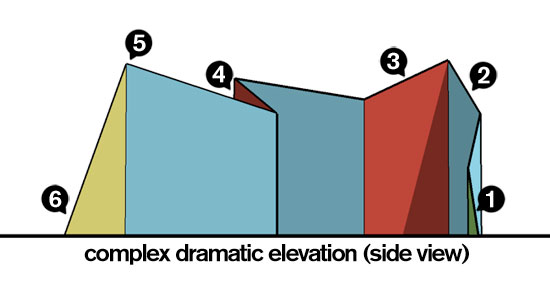 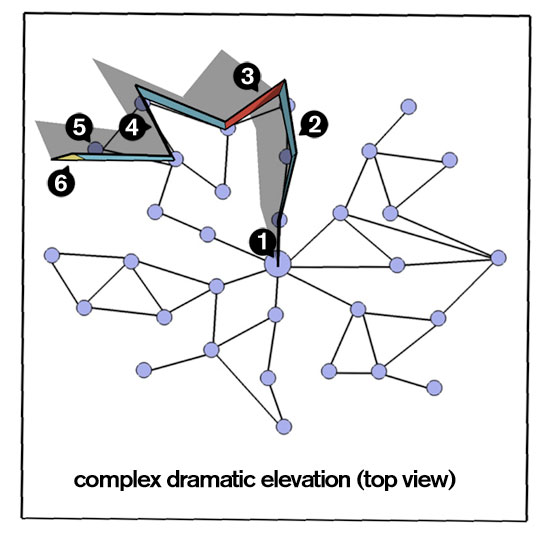 We intuitively equate drama with altitude: Rising action. Heightened drama. “Ratcheting up the suspense.” Raising the stakes. The higher the story goes, the greater the peril. It’s much more thrilling to watch someone walk a tightrope that a sidewalk, isn’t it?

Freytag’s pyramid presents a five-Act model for understanding dramatic structure in which a story’s climax is diagrammed as something higher than the rising action leading up to it, or the falling action coming after. This notion of “rising toward climax” is common and intuitive now. Any reader of a movie review gets this stuff.

Seldom, though, does a story stick strictly to Freytag’s symmetrical pyramid. Most stories’ dramatic structures are like mountains, not pyramids. Little sub-climactic peaks rise and perilous valleys fall between our heroes and their final victory or defeat. Indy gets the Ark, then he loses the Ark, then he gets the Ark again. Stories aren’t as tidy as Freytag’s pyramid.

In his defense, Freytag knew this — he was setting up an orderly means of appreciating old or ancient plays when he was drew up his pyramid. Whether you buy into the systematic appeal of the five-Act structure or not, whether you agree that Exposition is an Act unto itself or not (I don’t), the notion of elevation as a measure of drama is useful.

All we’re doing with dramatic elevation is exploding into three dimensions the idea of height as a measure of drama. Once you’ve broken it out from simple height, you can affix it to a gameplay web to simultaneously chart progress through a matrix of choices (the gameplay web) and the relative dramatic tension along the way, so we can see and appreciate the narrative emerging through play. (Images 4–6 of 6)

Don’t mistake appreciation with validation. The point here isn’t to grant some approval to play-stories that sync up just right with the model. The point is to get a better understanding of the stories emerging through your play sessions so that you can better control how drama rises and falls in later sessions. If you notice that your game adventures tend to lose a lot of dramatic altitude in the middle, you can take steps to raise the stakes and sustain suspense through to the end.

The higher the dramatic elevation, the greater the peril, the more substantial the costs of failure, the more pressing the deadline, the farther the fall. Higher levels of drama come from battles against fiercer monsters, from attempts to disarm bigger bombs, from blistering gunfights atop taller skyscrapers.

This is a work in progress. Got an opinion or some paprika? Toss it in and we’ll stir it up. With just a bit of room to work with here, the best way to make sure that I’m tackling your questions or skepticism is to hear about it. The next column in this series is about webs and elevation in dungeons. What should come after that?

In the unpredictable and resource-driven environment of many games, however, the random factor means that climactic encounters might suddenly emerge. A few bad dice rolls and an early encounter with too many pathetic kobolds might put a character’s life in jeopardy — now the stakes of the battle don’t hinge on how much ammunition is used but on how many characters die. Some bad luck in a board game like Kevin Wilson’s ruthless frag-festival, Doom, can cause a dramatic climax (and a gruesome end) well before the gameplay web is fully explored.

It’s the difference between a loud whimper and a bang. Actual play, success or fail, might determine whether the players and their characters wail or cheer, but recognizing and controlling the sound volume should ensure that wailing or cheering is dramatically satisfying. Know when to dial it up and when to turn it down.