On Drama and Giving a Damn

In my previous post, I looked at my first real session of play of D&D’s 4th Edition. At the end of that post, I put up a graph comparing the good times being had by us, the players, versus the supposed dramatic arc of the story unfolding through play. This is new talk for me. Previously, I’ve been interested in dramatic elevation with the understanding that it should correspond to player interest in the story (but the unwritten acceptance that it doesn’t, necessarily). In our scattershot playtest of Keep on the Shadowfell, though, the drama of the story was pretty well separate from our investment in it.

Put it another way: The lives of our brave and beloved heroes were at stake, but we didn’t much care. 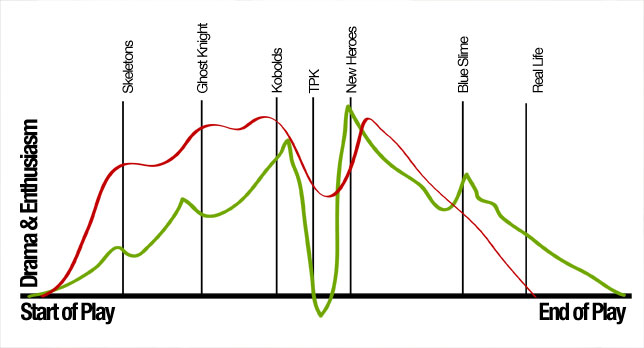 The green line shows dramatic elevation in the fiction unfolding during play. This is sort of bullshit, insofar as there’s no third-party audience watching, rapt, as the story twists and turns—but we were sort of aware that were we to cut the fiction together into a movie afterward, this is more or less how it would play. In other words, the green line shows how the adventure that did unfold would have played if it were theater.

“Dramatic elevation” is a bit of jargon I’m using as part of my ongoing thesis on storytelling in games. You don’t need to know much about it for this article, but you can read more by checking out all the posts in the Will’s Thesis category here at GPW.Yes, there are some judgment calls in there—a TPK can be climactic (rather than anti-climactic) depending on how you tell the story, but this one wasn’t. It was sudden, unexpected, and unwelcome; a letdown. One minute we were scratching our beards, contemplating our next moves, and the next minute we were scratching our beards, wondering just what the hell went wrong.

The left end of the graph—the beginning of the adventure—sets it up. The red line says that we’re all enthusiastic to try to the new system and see what these cool powers on our character sheets do. Our enthusiasm wavers a bit as we wonder if the first-encounter skeletons are going to do us in, but we’re still involved in the game. The green line says that we know this is just some introductory skirmish at the beginning of our play time, though.

There’s a miniature peak in the drama when the skeletons are heroically bested, though, and the drama continues to rise when the ghostly knight appears and demands the heroes to parley. We’re learning the new skill-challenge system and, while our roleplaying of the skill checks is superficial at best, the stakes of the story are rising as the characters supposedly deliver compelling monologues that sway the spirit of this long-dead knight. It makes for a good scene, we think, but we’re playing through it on fast-forward—our real interest in seeing the next encounter and the game in action again.

The sense of dramatic tension is being kept up by me, the Dungeon Master, in the background, though it’s a pretense. This day, we all know, is less about storytelling and more about gameplay. Still, I want the players to see something at stake in their characters’ actions, so broad strokes or now, background or no, I keep it up.

Near the middle of the graph, we catch wind of the evil kobolds (which the players are still expecting to be pushovers, I think, though anyone who’s read about Keep on the Shadowfell knows they’re not). As established by the narrative up to this point, these sinister grave-robbing monsters are the real enemies of this tale—so we’re at the final confrontation already. Three encounters, three acts of the story, I was thinking at the time.

But just a short while into this first heroic assault on the kobolds, the heroes fall in battle! (TPK) So, uh… I guess the kingdom is doomed, huh? The green line says so; it draws this setback as a sudden dramatic reversal, leaving the imaginary audience gasping. But we’d established early on, both at the game table and in the fiction of the story, that there were three other heroes en route to help. When they arrive in the dungeon, it’s with mystery and fanfare—they are heroic avengers here to rescue their friends and get even with those nasty kobolds. Huzzah!

At the same time, the red line shows how our enthusiasm is dampened but not destroyed by the TPK. We, as players, are intrigued. Maybe knowing what we know now, and with those three replacement PCs, we could try again?

But we’re expected at a barbecue before long. Some folks are coming by the house to carpool. And it’s getting really hot in the house with the AC broken. Still, we decide that it’s just one encounter, we’re here, and we don’t want to end with that sorry anti-climax, so we press on.

The right half of the graph shows how our enthusiasm wanes (the red line) even while we keep up the pretenses for a while (the green line) with little doses of fictional detail and characterization. “‘You won’t hurt any more of my friends!’ yells the cleric,” that sort of thing. But it’s just getting hotter, and the humidity’s made the Oreos go soft, and the barbecue technically started half an hour ago. And the dice are rolling… okay, but they’re not fanning any flames, if you know what I mean.

Tenacious and stupid, I stick to the adventure notes. When the last kobold is slain in the pool, it unleashes a blue slime. (There should be an exclamation point there, but we can’t be bothered—it’s too hot.) Seeing this as a new peril, we acknowledge the dramatic spike on the green line, but we don’t really want to fight a whole other encounter, so the red line continues to dip. We only keep playing at all, I think, because I want to see how Solo monsters work out and everyone else is being polite.

The blue slime is defeated or something. Who cares? As you can see, once the enthusiasm drops, the drama inevitably follows.

For a time there, though, they were moving around in ways that were connected but not identical. The quality of your story or your storytelling isn’t necessarily why your players are there. Of course we know this already, but this was a timely reminder to me that sometimes a token story is enough to keep things moving, and sometimes keeping things moving is what’s important. I don’t need to gorge myself on richly characterized narratives with cutting subtext and slippery symbolism. Sometimes it’s a delight to snack on a story that’s light and minimalist, kept alive with spare but vivid details and broad splashes of characterization.

I knew this, but I feel like I learned it again.

But, the more important lesson: Know when to stop playing. I should have let the players have their heroic victory and skipped the damn slime. This would’ve cut the graph off with our enthusiasm as high as it was at the blue slime, and a short, triumphant epilogue could’ve given us the same spike on the green line, and ended us on that high note. Play and learn and remember, I guess.

As one player, Zack, said about the adventurer’s life: Some days you loot the bodies and some days the bodies loot you.